Park Avenue Baptist Church hosted a Decadent Decades luncheon in order for the various generations of women in the church to get to know one another. 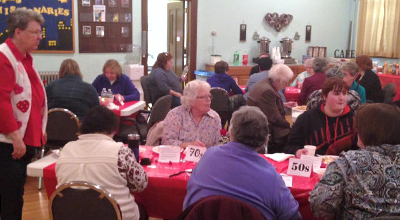 BINGHAMTON, N.Y.—Park Avenue Baptist Church hosted a Decadent Decades luncheon in order for the various generations of women in the church to get to know one another.

“Most churches are comprised of multiple generations that gather to worship in the same building each week,” says Melissa Brink, wife of Pastor Mike Brink. “Ours is no different.”

At Park Avenue Baptist are people born from the 1930s and earlier to the 1990s and later. “Sometimes this age spread can create a gap in relationship building,” Melissa says. “Generations can sometimes resist one another without truly knowing one another. Blame for all that is wrong in the world or in the church can be easy to cast at someone whose name and story we don’t know.”

In order for the church body to care for one another, she says, they need to know one another. “But it can be a bit unnatural/uncomfortable for a 16-year-old to get to know an 80-year-old and vice-versa.”

Decadent Decades brought women together in an atmosphere where they could mingle. Each seat around tables was marked with a place card showing the decade of the attendee’s birth year. On the back of the place cards were a variety of questions to encourage get-to-know-you conversations.

“We were pleasantly surprised with the amount of friendly chatter that the 30-plus ladies generated,” Melissa says.

During dessert, two of the ladies—Susan (born in 1937) and Emily (born in 1998)—were interviewed so everyone could see what God has done and is continuing to do in their lives. Melissa says, “It was neat to recognize God as the author of both ladies’ stories, and how, in spite of how different their lives have been, He has made His name great in their lives.”

Park Avenue Baptist Church plans to host a few of these gatherings each year. “We want to hear from other ladies who, from all generational appearances, have nothing in common, but with Jesus as Savior they are sisters in Christ.”

Year-end Ministries in India Include Baptisms

John Murray passed away on January 2, 2021, stricken by a sudden ailment that doctors are still trying to identify. He was ...more

A youth program in Manipur met in December to praise God for His ...more