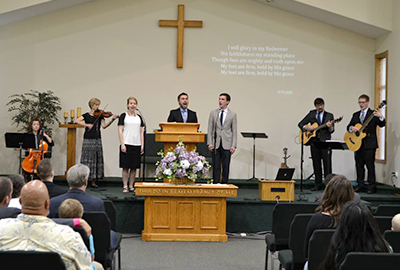 MARSHALL, Minn.—First Baptist Church enjoyed several days of fruitful partnership with Galkin Evangelistic Ministries. The team consists of the Galkin family—Will, an experienced and passionate expositor of the Scriptures; his wife, Christy, who holds a bachelors degree in violin performance; and their five children—along with eight additional members. They travel the U.S., leading multiday events featuring preaching, concerts, and ministries to children, youth, and adults.

On May 3–7 the Galkin team ministered at First Baptist Church. The team assumed responsibility for the Sunday services; hosted a men’s barbecue with fishing-theme decorations and fun games; presented an Irish music concert; organized a Cola Wars rally, featuring indoor and outdoor games, for students in grades six through 12; and hosted a ladies’ night out that included dinner, games, and prizes.

First Baptist spread the word about the May 6 concert by advertising the event on a digital billboard and giving invitations to faculty and students at Lynd Public School. First Baptist had arranged for the team to perform at community venues, including that school on May 5. Though the Irish folk and bluegrass concert was billed as educational, the school administration gave the team “a surprising amount of freedom,” says Pastor Greg Liscott, so the team included a sacred piece accompanied by a brief gospel statement​. Faculty and students received invitations to the concert that would be performed the next evening at First Baptist, and many came to hear the music and gospel message. 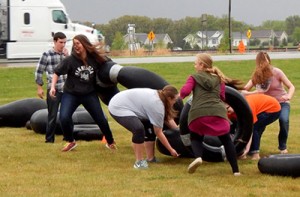 First Baptist Church was encouraged by the community’s response to the week of events and the connections the members made with those outside their church. Salvation decisions were made, and opportunities for discipleship are in place.

“Will Galkin and his team were a tremendous encouragement to our church,” Linscott says. “We are thankful for their talents, but more importantly the way they helped us see the opportunities that we have in our grasp to communicate the hope of Jesus Christ more effectively as we represent Him here in Marshall.”​​

Don’t wait until after VBS to plan for follow-up. Here are six follow-up ideas for right ...more

The key to the success of any endeavor is training. And ministering as a chaplain is no ...more

An association of churches in India hosted a motivational program for Sunday School ...more