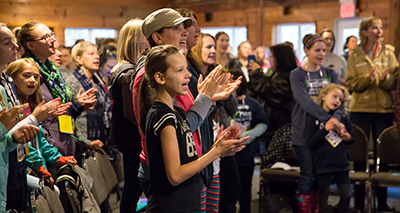 CARNATION, Wash.—With the weather Oct. 14 and 15 forecasted to bring the storm of the century to the Pacific Northwest, Camp Gilead questioned its plans to host its 13th Annual Mother/Daughter Retreat.

An off-shore typhoon threatened to bring one of the worst storms the area had seen in many years. Expected to bring high winds and record rain, the storm “was being pitched as quite an epic event,” says Kimberly Mallory, program director at Camp Gilead. “Store shelves were cleared, bathtubs used as water reservoirs, generators were bought in mass—the Northwest braced for the worst.”

Camp Gilead’s Mother/Daughter Retreat had been sold out, and girls of all ages and excited moms were looking forward to the event. But the retreat “landed on the very weekend that the storm would hit the West Coast,” Mallory says. “After much consideration and preparation, we decided to go ahead with the retreat and pray for the best.”

As guests arrived at 5 p.m. on Friday, Oct. 14, the weather was balmy, a few gusts of wind blew, and patches of blue appeared among the clouds that occasionally gave way to rain. The forecast turned out to be much ado about nothing; the weekend at Camp Gilead, however, was epic, Mallory says.

Moms and daughters enjoyed a wide variety of workshops and activities, like manicures and pedicures, reading books together, horseback riding, art and painting, card making, pumpkin crafts, cookie decorating, and a late-night movie.

Through all of the workshops, activities, and chapel session, the moms and their daughters were encouraged to take a look at what they enjoy doing together and learn how to work as a team. Deborah Janho spoke on forgiveness and reconciliation and having a spirit of being on the same team in their relationships. Janho is a graduate of The Master’s College and mom to three daughters and two sons.

Moms and their daughters are thankful that Camp Gilead held its retreat as planned. “Little girls (and big ones!) will forever remember their special weekend with Mom,” Mallory says.

For three years in a row, from 2013 to 2015, Camp Gilead has been voted Best Kids Camp in the Northwest by Best Northwest Escapes magazine.

"Our Hearts Are Heavy," Says Church Planter in India

As the second wave of COVID-19 continues to overwhelm India, Wesley Chatla has been delivering food to ...more

Brian Spencer, a retired pastor, died June 4. He was ...more