Churches of the Wisconsin Association of Regular Baptist Church have said farewell to Ed and Diane Fuller, who retired as state representative and wife. 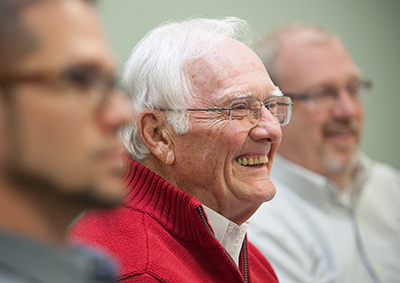 WISCONSIN RAPIDS, Wis.—Churches of the Wisconsin Association of Regular Baptist Church have said farewell to Ed Fuller, who retired as state representative. The churches were meeting for their fall conference at Calvary Baptist Church Oct. 17 and 18.

Fuller had been in pastoral ministry for 43 years in Pennsylvania, Wisconsin, and Ohio before accepting the role with the Wisconsin fellowship. He and his wife, Diane, had actually moved to Racine, Wisconsin, to retire when the WARBC invited him to become its state representative.

Ed and Diane Fuller are “a model ministry couple” in the GARBC, says National Representative John Greening, and his wife, Daria, in a tribute to the Fullers, thanking them for their service. The Fullers, say the Greenings, have maintained humble spirits that “always place the Lord and others first,” exhibit an “enthusiasm for the local church,” persevere in trials, and display wisdom that “repeatedly provides insight and guidance.”

As state representative for the past 13 years, Ed Fuller describes his role as a “pastor to pastors” for the Wisconsin association’s 32 churches. He has also been a frequent speaker at churches, retreats, and conferences. Whenever possible, Diane, an accomplished pianist, has traveled with him to assist in the services. His vision as state representative was to see new churches started in Wisconsin. Through his leadership, the WARBC established a church-planting fund and appointed a missionary to become the Wisconsin state missionary church planter.

In gratitude for the Fullers’ ministry, the churches of Wisconsin presented the couple with a retirement gift of over $7,000, “which only reflects a small measure of the affection with which they are held in our state fellowship,” says Bill Mattox, pastor of Meadowood Baptist Church, Madison, Wisconsin.