Grace Baptist Church reached out to its community in a creative way during a time of unrest in the wake of the death of George Floyd in Minneapolis police custody. 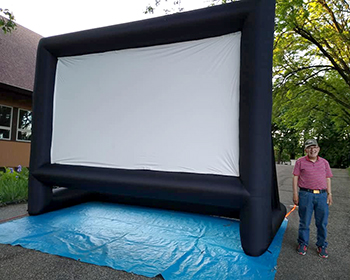 AUSTIN, Minn.—Grace Baptist Church reached out to its community in a creative way during a time of unrest in the wake of the death of George Floyd in Minneapolis police custody.

Grace Baptist is “a church whose heartbeat is to touch people with the gospel of Christ,” says Pastor Dan Mielke. For that reason, the pastor invited his congregation and community to the church parking lot June 5 to watch the movie Woodlawn, the true story of how Birmingham, Alabama, in the early 1970s had been divided by racism but became united in the love of God.

In the movie, an outsider named Hank (actor Sean Astin) shares the gospel with the high school football team, which particularly faced racial tension, and nearly all of the players profess Christ as Savior. “The change is so profound in them it affects their coach, their school, and their community in ways no one could have imagined,” the movie’s synopsis states.

The drive-in event was part of a series of gospel-focused movies the church has been showing in its parking lot on Friday nights, using a 20-foot inflatable screen and a low-power FM transmitter. But the largest attendance has come with the showing of Woodlawn. The weekend before the movie, one of Grace Baptist’s pastors attended a peaceful protest in Austin, where he invited leaders to watch the film at the church to see how Jesus is the answer to society’s problems.

“It has been said that the challenge for the church is to proclaim an unchanging message to a changing world,” Dan says. “This year has brought many challenges to so many,” especially as pastors have had to use new ways to minister to their congregations and communities amid church building closures to slow the spread of the coronavirus.

Pointing out Acts 1:8, where Jesus says, “You will be my witnesses in Jerusalem, and in all Judea and Samaria, and to the ends of the earth,” Dan prays that as his church and others begin meeting for worship services in their buildings again, they would “continue to have an Acts 1:8 ‘four corners’ focus instead of a ‘four walls’ mentality.”