NAPERVILLE, Ill.---Emmanuel Baptist Church of Warrenville honored Pastor Dale and Shirley Williams with a surprise celebration for having completed 25 years of ministry with the church. 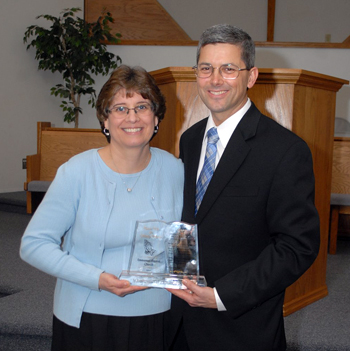 NAPERVILLE, Ill.—Emmanuel Baptist Church of Warrenville honored Pastor Dale and Shirley Williams with a surprise celebration on March 30 for having completed 25 years of ministry with the church.

At the beginning of the service, the sanctuary overflow rooms were opened to reveal the presence of Pastor Williams’ entire family, who had been flown in from all over the country. A number of former church members joined them. John Kealen, executive director of Camp Manitoumi, was the guest preacher.

Dale, a 1986 graduate of Faith Baptist Bible College, has been pastor since March 1989. He and Shirley have been married for 26 years and have four grown children. He says he “counts it a privilege and a blessing to have been able to shepherd long enough to see children that were born since he arrived in Warrenville, graduate from high school, and prepare to serve the Lord in the future.”

In addition to his role as pastor, he has served on the board of the Chicago Area Church Planters, Inc., since 1997 and has served seven terms on the Council of Ten for the Illinois-Missouri Association of Regular Baptist Churches.

In appreciation for the Williams’ ministry, the church family gave them a commemorative plaque and an additional 25 days of vacation. A dinner for all who attended was held in the fellowship hall after the service.

In Liberia, K. C. Brown Nursery and Primary School plans to expand its education to junior high school students as the Lord ...more