Church Remembers “the Works of God” during 50th Anniversary

Focusing on God’s grace and faithfulness, Urbandale Baptist Church (Iowa) celebrated its 50th anniversary with a series of meals, fellowship times, and services. 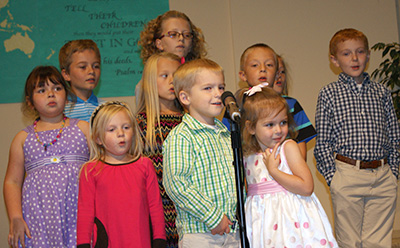 URBANDALE, Iowa—Focusing on God’s grace and faithfulness, Urbandale Baptist Church celebrated its 50th anniversary with a series of meals, fellowship times, and services.

Pastor Nathan Gast recaps the church’s history: On April 26, 1964, in a local elementary school building just one block away from the church’s current location, Urbandale Baptist Church began as a Bible study started by Pastor A. D. Mohr. He was joined by a handful of people from Grandview Park Baptist Church in Des Moines who saw a need for a Regular Baptist church in Urbandale.

The anniversary weekend kicked off with a Saturday fellowship called “Family Reunion Time.” People from all decades of Urbandale’s ministry enjoyed a picnic and a sermon preached by Stan Mohr, second pastor of Urbandale Baptist Church (1967–1974).

The next morning, Pastor Dick Dayton, the church’s fourth pastor (1985–2012), preached in the worship service. Afterward, the church family enjoyed a catered meal and then celebrated with a third session in which Gast preached the final message of the day.

The theme for the anniversary came from Psalm 78:6 and 7: “That the generation to come might know them, the children who would be born, that they may arise and declare them to their children, that they may set their hope in God, and not forget the works of God, but keep His commandments.”

Next post Church Remembers "the Works of God" during 50th Anniversary

Previous post Resolution: Reaction to the Terrorist Attacks of September 11, 2001