First Baptist Church in Minnesota has made it a priority to find deliberate ways to reach people for Christ in its own city. 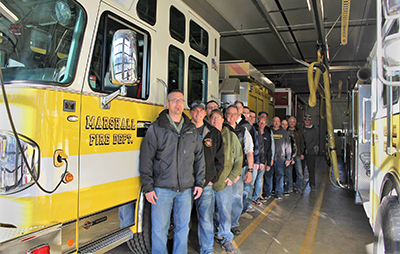 MARSHALL, Minn.—One of the purposes of First Baptist Church is to “seek the salvation of the lost at home.” This year the congregation has made it a priority to find deliberate ways to accomplish that purpose better in the city it has been called to serve.

One way the church worked together to reach its own city for Christ was by establishing a connection with the Marshall Fire Department. The church obtained from the fire chief a list of 50 firefighters’ names and distributed the names to the congregation’s small groups. Individuals and couples who took a name prayed for the firefighter by name for a month. Then the small-group members received a gift box, a pen with the church’s information on it, and a gospel-centered booklet. Their assignment was to write a note of appreciation and assurance of prayer and then give the note, the pen, and a gift to the assigned firefighter.

“The congregation rose to the challenge, including a variety of items such as home-baked goods, fudge, and gift cards to local coffee shops,” says Pastor Greg Linscott.

The church delivered the gifts to the department during one of its scheduled meetings, and the firefighters were  receptive and appreciative. One firefighter later remarked to a coworker from the church that “no one has ever done anything like this for us.”

Linscott says, “The church continues to pray that this gesture and others planned throughout the year will lead to future opportunities for gospel engagement.”