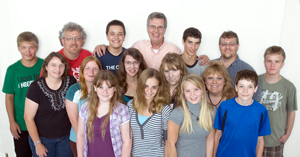 SCHAUMBURG, Ill.—“We’ve got some remarkably talented people working here,” says GARBC National Representative John Greening, leading 11 teens through Regular Baptist Press. The youth group of Grace Baptist Church, Plover, Wis., toured the 58,500 square foot Resource Center as part of a missions trip. The church uses RBP curriculum for its children and adult classes, and some teens quickly recognized familiar products, like a wall poster from the book of Judges. But now some teens do the teaching, and seeing the Resource Center at work has given them a new appreciation for the products they use. “It’s easy to take the resources for granted,” says Caitlyn Richard, 15. Ben Taylor, 16, adds, “It’s nice to put a face to it.” For Ben, visiting the graphic designers was a highlight. As art director Steve Kerr showed them the graphics department, he cautioned the teens against waiting to serve the Lord until they were older. “Use your skills in your local church right now,” says Kerr. “Don’t wait until you’re in some career.” The teens were surprised by the staff’s array of abilities. Photography director Darrell Goemaat reminded the youth group that God equips His people differently to accomplish different jobs for Him. “Don’t think, ‘I have to be a pastor or a missionary to use my skill for the Lord,’ ” says Goemaat. In fact, many believers don’t receive a paycheck from a Christian institution, but that doesn’t make their service any less valid. And while some people are called to serve in the limelight, other Christians serve in less visible areas. “If I do my job correctly, most people don’t see me,” says Josh Smith, who serves as network administrator, keeping the company’s computers and servers happy. “Point being that God has a different purpose for everyone.” And that’s why youth leader Brian Richard wanted his teens to see the Press. “We wanted to see ministry in action, real people serving the Lord,” he says. “We have a great association, and we need to expose it to the youth.” The teens saw many people serving the Lord during their trip, which took them from Shepherds Ministries in Union Grove, Wis., to Pacific Garden Mission in Chicago. After spending time at Shepherds, the youth group was impressed by the residents’ friendliness. Later the teens witnessed a taping of Unshackled!, a radio drama series, following their tour of Pacific Garden Mission.
Posted in Featured Stories, GARBC News, News on August 13, 2010.

Peace in a World at War

On Wednesday morning of the 2021 GARBC conference,  a speakers panel addressed topics pertaining to ministry, life, and the Holy Spirit. The panel featured Mike ...more

David Strope, chairman of the Council of Eighteen, called the 2021 GARBC business meeting to order, saying, “We do have some significant issues to address, ...more