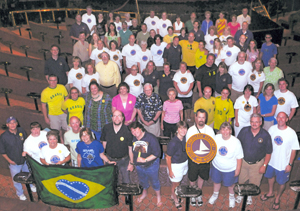 WESTERN CARIBBEAN—Alumni, spouses, teachers, and dorm parents met for the fifth Fortaleza Academy reunion on a four-day cruise. Fortaleza Academy began in 1953 as a ministry of Baptist Mid-Missions. Small graduating classes and alumni spread across the globe make it hard to have class reunions. “All-school” reunions began in 1990 and have continued every five years since. “A lot of people don’t understand how you can get together alumni from 2006 all the way to 1969 and still have some kind of connection,” says Martha McMahon, “yet the connection is really our experience of growing up in Brazil, of having had parents as missionaries, and going to the same school and having that whole experience. And because there was consistent faculty—with the Linds and Miss Wing and different ones—there is that connecting thread. So when people say, ‘I had Miss Wing for first grade,’ or ‘She was our choir director,’ they understand.” Helen Wing was photographed with a number of her former first- and second-grade students. She says that some on the cruise “left my first term, and I haven’t seen them since then. It was really good to see them.” She has sweet memories of the school at its peak, when enrollment was nearly 100, during the 1970s. The four-day cruise gave plenty of time for reminiscing, catching up, photo-taking, and making new memories. Clinton Young (1989) brought memorabilia from the two now defunct FA campuses. And Martha McMahon told how she received one of the concrete benches from the old campus. The academy sold its original campus, purchased a new one, and then, due to a decline in enrollment, chose to close the school at the end of the 2010–11 school year. The new campus was sold, and this year’s students meet in homes. The Class of 2011 will be the last graduating class. For the 303 grads, the nearly 500 other alumni, the teachers, and the dorm parents, FA will always be less about the location and more about the people and memories.
Posted in Featured Stories, GARBC News, News on October 27, 2010.

RBP Author Speaks on How Dispensationalism Makes a Difference

Dr. Mike Stallard was the main speaker for the Northeast Fellowship Fall Bible Conference hosted by Calvary Baptist Church. The conference theme was “Dispensationalism: The ...more

For Orchard Baptist Baptist Church, hosting a Fall Palooza is a great way for the church to connect with its community. ...more