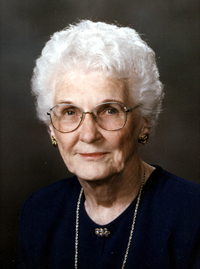 GRAND RAPIDS, Mich.—Meryl E. Welch, a musician who served with her husband for many years in pastoral and college ministries, died July 3. She was 92. She and her husband, Wilbert, were pastor and wife at North Casnovia Baptist Church, Bailey, Mich.; Calvary Baptist Church, Rome, Ga.; and Calvary Baptist Church, Muskegon, Mich. In 1959 Wilbert became president of Grand Rapids Bible Institute (now Cornerstone University). Meryl was also a musician, composing many songs used in Regular Baptist Press Sunday School curriculum. When she was a teenager, Meryl played for many youth rallies. She played the marimba and was invited to play in weekly revival meetings in cities and churches of West Michigan. Then while her husband was pastor in Georgia, Meryl became involved in daily radio music broadcast ministry seven days a week. When Wilbert became president of Grand Rapids, Meryl became involved in the music department, playing the organ, piano, and marimba and serving as a music instructor. The Meryl Welch Musical Arts Endowment was founded in her honor. In reviewing their years of ministry, Meryl often stated that she and Wilbert praise the Lord for the fruitful years He so graciously granted them. She was preceded in death by a daughter, Donna, and a son, David. She is survived by her husband of 71 years and four children, Robert, W. Curtis, Dale, and Arlene Betts.
Posted in GARBC News, News on July 10, 2013.

Thinking Ahead: When It's Time to Say Good-Bye to Big Fish Bay

Before you say good-bye to Big Fish Bay--that wonderful vacation spot--host a cookout, picnic, or fish fry. Be sure lots of friendly church members are ...more

Hello, friend, Please consider two important things that are crucial to the life of our fellowship: nominating men to serve on the Council of Eighteen and ...more