CLARKS SUMMIT, Pa.—Summit Baptist Bible Church hosted "Ladies’ Night Out: Get a Clue," a live version of the board game Clue. 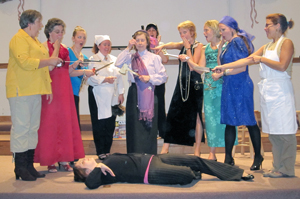 Ladies' Night Out at Summit Baptist

CLARKS SUMMIT, Pa.—On Friday, Sept. 10, at 7 p.m., Summit Baptist Bible Church hosted “Ladies’ Night Out: Get a Clue,” a live version of the board game Clue.

Ladies’ Bible Study Coordinator Diane Lytle tells how the evening began. “We opened the evening by having the women assemble in the ‘ballroom’ (auditorium). The lights went out, someone screamed, and when the lights came back on, Mrs. Boddy was on the floor. The characters came running in from different doorways, accusing each other of the crime.” Diane played Police Inspector. “I came in saying, ‘The law will take care of this’ and read descriptions of each of the characters,” she says. “I then deputized the ladies who attended to be detectives to help solve the crime. When one of the groups solved it, I blew a loud whistle to call everyone back to the ballroom.”

Small groups of detectives moved from room to room, solving puzzles and gathering clues to discover that it was Professor Plum with the ax in the ballroom.

The “hall” was set up with displays promoting the six new ladies’ Bible studies. The ladies had to answer questions about each study to receive a clue. They also had the opportunity to sign up for the Bible study of their choice.

Diane says they had a good response to the Bible study sign-up. The church offers two kinds of studies: one that requires commitment and includes homework and one that better fits those who cannot make that kind of commitment. The studies are offered at a variety of days and times.

Of the evening, Diane says, “The comment I heard over and over again was, ‘We have to do this again!’ The teen girls who attended talked about having their own version with their youth group. The ladies who played the suspects had so much fun dressing up and staying in character all evening.”