Pastor Jacquelin Saint-Preux of Eglise Evangelique Baptiste welcomed Michael Nolan, director of Baptist Builders Club, to a special service acknowledging the GARBC’s ministry to and support of churches in Haiti. 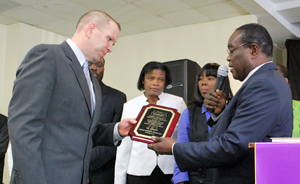 ELMONT, N.Y.—Pastor Jacquelin Saint-Preux and the congregation of Eglise Evangelique Baptiste welcomed Michael Nolan, director of business administration/treasurer of the GARBC and director of Baptist Builders Club, and his family to a special service acknowledging the GARBC’s ministry to and support of churches in Haiti. After greeting the guests from the GARBC, “Pastor Jacq” called on those involved in Eglise Evangelique Baptiste’s various ministries to come forward, and acknowledged them for their work. This team stayed at the front as Pastor Jacq presented a plaque to Michael Nolan who received it on behalf of the GARBC. Pastor Jacq pointed out that the GARBC was the first group to respond to Baptist churches in Haiti with fellowship, prayer, and support after the Jan. 12, 2010, earthquake. He further acknowledged that the GARBC held organized prayer times for the churches and people of Haiti. As Michael read the plaque’s inscription in English, Pastor Jacq translated it into Creole. Michael Nolan thanked Pastor Jacq and the church. He reiterated the GARBC’s commitment to helping churches in Haiti: “This is very special and kind. I will accept this on behalf of the GARBC and the International Ministries of the GARBC. Know that we are committed to continual prayer and support of fellowshipping Haitian churches, both here in the States and in Haiti. In fact, a team from the GARBC resource center, led by Chris Hindal, was there recently for a week with Pastor Prédestin Hérard, serving with the churches there. Also the GARBC International Ministries has rented a house so that GARBC churches can send ministry teams to Haiti to serve in a similar way.”
Posted in Featured Stories, GARBC News, News on December 3, 2010.