What about Life on Mars? 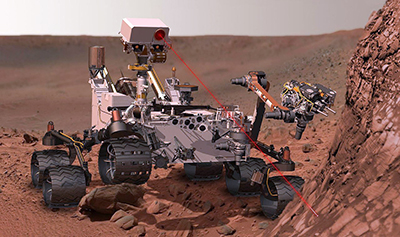 The scientific community is abuzz this week with the announcement that liquid water has been confirmed on Mars. Of course scientists have long known that water is abundant in our universe (including on Mars), but specific evidence of a stable supply of liquid water has been lacking. It seems that we now have evidence of recurring seeps involving liquid that has, at a minimum, a water base. Not exactly the Amazon River or Lake Superior, mind you, but water nonetheless.

The reason this discovery is important, it is argued, is that the presence of water allows for the possibility of sustainable, carbon-based life somewhere other than Earth. Furthermore, it suggests that the provincial theory of biological evolution on earth now has a clear path to acceptance as a universal law. And if that is true, we finally have the last nail for the coffin of the Genesis account of origins.

Let’s look at the scientific data on its own terms and see how big this discovery really is:

In summary, then, I would suggest that the discovery of water on Mars is no cause of alarm at all for believers, and certainly offers us no reason to amend the biblical paradosis. Nothing has happened.

Let’s put our hearts and minds into what the Lord has for us. Let’s do it wholeheartedly for the ...more

Brown Street Baptist Church is aiming to change the negative perception of law enforcement, at least for those who serve the church's ...more

Your Pastor’s Wife Is Human

Churches need to realize that although the role of a pastor’s wife can be rewarding and special, it can also be ...more

A church in Ghana will be able to start constructing a building, thanks to the generosity of a ...more