The Progression of Cultic Leadership: Thoughts on The Rise and Fall of Mars Hill

Six disastrous steps in the development of cult-of-personality leadership. 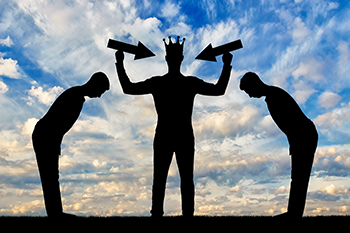 From our earliest days, recorded in the book of Genesis, fallen humanity has been obsessed with worshiping the creature over the Creator. Today this propensity is often manifested through infatuation with celebrities and compelling personalities, which is expected in a world without Christ. But it is tragic when it happens within the church. In Christian circles the consequences of man worship or following a cult of personality are, sadly, spiritual shipwreck and deep disillusionment. The worship of man never turns out well—whether it is found in the pages of Scripture or experienced in one’s own life. God will accept no substitutes for exclusive worship and loyalty to Him: He demands that He alone be glorified (Isa. 42:8). No exceptions or exemptions are to be made.

The Rise and Fall of Mars Hill, a podcast series produced by Mike Cosper and Christianity Today, unpacks for us the fascination many had with Pastor Mark Driscoll, with his meteoric rise to evangelical stardom, to his catastrophic and poignant fall. This fall eventually led to the dissolving of his megachurch, along with scores of satellite churches connected to Mars Hill of Seattle. The podcast series is a detailed and compelling documentary of a gifted and compelling individual whose character apparently never matched his enormous platform and influence. An important lesson for all of us.

This is relevant to us even in our circles, because many GARBC pastors and church leaders were deeply enamored with Driscoll during the peak of his popularity. With the accessibility of YouTube sermons and MP3s back in the day, the invention of podcasts, and the availability of conferences, scores of pastors within our own circles had become loyal listeners of Driscoll. They weren’t alone; Driscoll’s podcasts and sermons were downloaded by the millions.

Though I was never deeply enthralled with how Driscoll handled the Biblical text, he was indeed a persuasive, funny, compelling, and powerful communicator. I can still remember hearing a few of my pastor friends telling me how they religiously listened to Driscoll’s sermons, expressing how they wished they could emulate his bombastic and brash style.

The Rise and Fall of Mars Hill is a painful but necessary reminder of how toxic and persuasive the cult of personality can be and of how we Christians must carefully guard our hearts against elevating personalities and platforms to the place of deity.

My wife, Christina, and I have made it no secret that we were once part of a church and college involved in a cult of personality. The church and its senior pastor carried heavy influence in the more militant and man-centered end of fundamentalism. Only by God’s grace did we receive the wisdom to recognize the harm being done and the desire to remove ourselves from that kind of toxic culture. We saw in our own lives and in the lives of scores of others the emotional and spiritual damage done by those building ecclesiastical empires and their own brand.

I couldn’t help but see the parallels between the Mars Hill story and what Christina and I had experienced. The accounts we heard echoed what we heard nearly 23 years ago: stories of manipulation, scare tactics, promoting personality, ostracizing those who dared to disagree or voice concerns, cultivating unbiblical and extra-Biblical standards, and tying sanctification to loyalty to the personality.

Over the years God graciously gave me opportunities to shepherd individuals and families who came out of a similar toxic church environment. The antidote to following a cult-of-personality leader, we found, was to connect our hearts closely to the Good Shepherd of our souls, the Lord Jesus Christ. I pray that GARBC churches are fostering a culture that continually echoes the words of John the Baptist in John 3:30, “He [Christ] must increase, but I must decrease.”

Six Steps in the Cult of Personality

Based on what I heard in the first six episodes of The Rise and Fall of Mars Hill, I offer a summary of how cultic leadership progresses. Please note that it always ends badly. After all, anything that’s not built on the foundation of Christ will always crumble (see Matthew 7:24–27).

It’s no accident that these personalities gain a following; they are compelling, magnetic, charming, funny, and oftentimes innovative with their methodologies. People enjoy their company and will go out of their way to hear them. In turn, the downloads of their podcasts and sermons skyrocket. YouTube channels have scores of subscribers. People by the groves attend conferences where these personalities speak.

But the danger here lies in the personality getting in the way of the message. We pastors are not called to draw people to ourselves, but to Christ. Stick around for a while, and eventually that personality will let you down. In the end, the person simply cannot do what only God can do and cannot fulfill expectations and needs as God has promised to do.

The ministry isn’t about Jesus anymore. It’s about promoting and exalting a name, a brand. A brand is an identifying mark of a product or organization. A cult-of-personality ministry no longer primarily identifies with the Word, the gospel, or making disciples. Instead, it is centered around a personality, built on a personality—so much so that the personality is promoted and sold as the ministry’s brand.

This brand is not only the focal point of the ministry, but it becomes the marketing campaign. Revenues and numbers eventually center on the brand, making everything about the cultic leader. D. A. Carson once wisely wrote, “As long as people are impressed by your powerful personality and impressive gifts, there is very little room for you to impress them with a crucified Savior.”

Third step: loyalty to the personality becomes the test of faithfulness

A solid way to evaluate whether you’re still humble and teachable is to examine how you respond when others disagree with you. Followers dare not question or disagree with a cult-of-personality leader. The Rise and Fall of Mars Hill recounts how someone was fired from Mars Hill for disagreeing with the elders and was labeled a “heretic” simply for disagreeing.

The question How can I live today to please my Savior? is no longer asked. Instead, the focus is on pleasing the leader and making sure to stay loyal to his cause. The leader’s loyal following associate any kind of disagreement with him as rebellion against “God’s anointed.” This focus also produces an unhealthy fear of man, the kind of fear that is always wondering if the leader will accept one’s works, instead of wondering if those works are acceptable to God (see Galatians 1:10).

A cult-of-personality ministry will justify sinful actions and attitudes by quoting results: “Look at all the people coming to Christ.” “How could you say that we’re doing something wrong when we have so many numbers and so many lives are being changed?”

Let us not forget that God alone produces fruit (1 Cor. 3:5–7). Changed lives are the result of the power of God’s Word, not someone’s giftedness. God works despite our shortcomings, not because of them. Attributing the fruit of a ministry to the cult-of-personality leader is another way of robbing God of the glory that belongs to Him alone.

Fifth step: A willingness to defend the personality despite scores of people being hurt

A common denominator in accounts of cult-of-personality ministries is the leader insulating himself with a team of people willing to ignore his rampant narcissism. Not only will this team ignore his sin, they will defend it—even to the point of justifying it by attacking those who bring it to light. I myself have heard a “hero’s” sin being justified with the words “it wasn’t that bad.”

When a church, ministry, or institution is willing to ignore or justify sin in the name of protecting the brand, you can pretty much write “Ichabod” (“the glory has departed”; see 1 Samuel 4:21) over that ministry. Be certain that when sin goes unchecked, it will only aggressively spread to the point that catastrophic results are imminent. It is far more important to protect the name of Christ than it is to protect a compelling personality.

This is by far the saddest step. Not only does elevating deeply flawed individuals on a pedestal leave people confused and disillusioned, but it also has devastating consequences for an overall ministry. Once all the dust has settled on the fact that the ministry was built on man, not God, there are usually scores of spiritual casualties left in the man’s path.

We’ve seen this in recent years as once-prominent evangelical leaders have denounced the faith, been exposed for heinous sin, have left their marriages, and have been revealed as men who belittled and abused women. But the failure of a cult-of-personality ministry touches even more lives. It affects how people view churches. Some become so disenchanted with the local church that they refuse to ever go back. Others become cynical and have a tough time ever trusting church leadership again. Such attitudes are never justifiable, but cultic personalities tend to help create platforms for these kinds of heart attitudes.

The saddest part about these six steps is that they are preventable. God offers us a better path—that of keeping our eyes, affections, worship, and expectations set on Him. That alone is the only antidote to being constantly disillusioned by those we respected when we find out they are indeed fallen.

The desire to be known, applauded, recognized, and liked is nothing new. In fact, Jesus’ closest followers struggled with their own fallen desires for prominence. In Mark 10:35–45 Jesus taught His followers that to adopt His philosophy of ministry, they would have to understand they were first and foremost servants.

This truth is reiterated in 1 Corinthians 1—4 as Paul dealt with personality-driven divisions among the believers in Corinth. The way Paul defined himself must be the way each of us as a follower of Christ defines him- or herself: a servant. Perhaps the highest compliment anyone could give a servant of God is “You’re a faithful servant for the gospel.” We desperately need more people to broadcast this message: It’s okay to be quietly faithful, to be unknown.

How should we look at those whom God has greatly used in our lives and who have impacted us greatly for the gospel? Consider these words: “What then is Apollos? What is Paul? Servants through whom you believed, as the Lord assigned to each” (1 Cor. 3:5, ESV). To drive the point home, Paul wrote how to think of those in prominent positions of spiritual influence, saying “regard us, as servants of Christ” (1 Cor. 4:1, ESV).

Give thanks for those God uses in positions of leadership. Give honor to whom honor is due. Encourage them and pray fervently for them. But don’t worship them. They make lousy idols. Holding allegiance to and elevating a person to an unrightful place that belongs only to God is a recipe for disaster for him and for the ministry he is involved in.

Posted in Commentary, From the National Representative on August 16, 2021.