When reading books or hearing sermons on parables, you may well encounter some interesting commentary. Too often people approach the Bible’s parables as if they were true accounts. 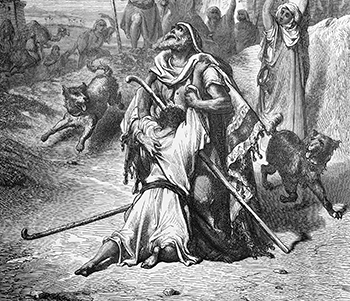 When reading books or hearing sermons on parables, you may well encounter some interesting commentary. What are your responses to the following comments on the parable of the prodigal son?

It is not uncommon to hear and read such commentary from Bible teachers and writers; too often people approach the Bible’s parables as if they were true accounts. The primary impetus for such a mind-set may come from an attempt to contemporize them for a modern audience. Whether or not one or more of the above statements about the parable of the prodigal son is fair-minded or pushing it is not an issue. Neither is whether the statements are based on exegesis or eisegesis; that is yet another appropriate concern, but for another time, and may become moot if we address the cause underlying such commentary.

What underlies such comments as those above belies an approach to the parables that is methodologically faulty. What needs to be clearly and consciously remembered throughout the study of the parables is their very nature. A parable is not a real or historical story. It is fiction. It is fabricated—not as in a lie, but rather it’s a story that has been woven with strings of one’s own choice to accomplish one’s point.

In the parable of the prodigal son, there indeed may have been a father who had two sons, the sons may have been at odds with each other, and that family may have experienced such an upsetting situation. Whether or not an actual historical parallel stood behind a parable is not justification to handle it as historical. Further, whether or not the audience knew of common allusions within a parable (creditors, debtors, servants, injustice, muggings, lepers, masters, long journeys, wayward sons, etc.) is not reason enough to treat it as historical. The very effectiveness and impact of a parable depends on its fictional nature.

It should also be said that such an approach as outlined above with the prodigal son lacks methodological and interpretive controls. Where do you stop? What are the limits to inferring and including unstated details and comments? When is a teacher, writer, or preacher out of bounds by adding details? Is one’s sanctified imagination the limit? For instance, whoever said that asking for one’s inheritance is saying, “Dad, I wish you were dead”? Nevertheless, I have heard and read that specific comment over and over in recent days. After one writer states it, others pick up on it, for whatever reasons that compromise appropriate Biblical interpretation.

Just because an inheritance, by definition, comes upon the death of another does not mean a person asking for an inheritance early wishes another were dead. It does mean that a person may not have the resources to get on his wayward path and does not want to wait to receive what he needs to get on that road. Nevertheless, the lack of interpretive controls leaves one up to all kinds of commentary that may or may not be fair-minded, pushing it, or out in left field.

The parable of the prodigal son is not about the son wishing his father were dead and securing Dad’s money so he could immediately get on the road of rebellion. That may well be true of many who step onto that road, and that may not be a completely unfair way to characterize rebels. However, it misses the nature of what a parable is and what it is designed to accomplish.

A parable, by nature, is a fabricated story. That fact is foundational to handling parables. Sometimes parables’ details can be identified with real life; at other times they move out of any real life experience. Sometimes parables are in the realm of reality; at other times they move into the realm of fantasy (e.g., the parable of trees choosing a king in Judges 9:8–15 and the mustard seed becoming a tree in Matthew 13:31).

Authors construct parables as they desire, purposely adding details that inextricably lead to the point they want to unmistakably make. That point is bounded by the events or statements preceding and/or following the parable (“To this end, that men ought always to pray and not to faint,” Luke 18:1).

What is noteworthy about parables is that authors can include the details they desire. They can construct a story with one man or woman, two characters, or three or more characters or groups. They can include a crisis and then a reasonable response or socially shocking and unexpected response. They can have characters say or do whatever the writers choose. Writers design parables as they will to accomplish what they desire. That is what marks the nature of a parable.

That being said, authorial intent is why parables need not be expanded upon or contemporized. The Lord designed the parable of the prodigal son, including two sons because two sons fulfilled His purpose. He did not need to construct the story that way, but He did. He obviously did not want to talk just about the actions of one son, but of two sons.

To further the story and the point the Lord wanted to make, He also chose to make the prodigal the younger son. He did not need to construct it that way. He did that for a reason, because it is His story.

Now, some details in the story are part and parcel of what makes it stick together. The story includes a citizen who gave a job to the prodigal, hired servants who worked for Dad, and a single servant who responded accurately to the second son’s question.

However, by design, the Lord also mentions certain details, including the following:

The Lord also wrote out the prodigal’s speech for us, and by design included the words that made his repentance honest and acceptable. This is all by design, constructed this way to make His point.

The Lord also constructed the story in such a way that it spoke of desire and love. “When he was yet a great way off, his father saw him, ran, fell, kissed.” The Lord included these parts on purpose.

The Lord also decided to stop the prodigal’s speech midway and had the father choose three items to respond with: a robe, a ring, and shoes. And since it is His story, He decided to make the robe the best robe.

The Lord also wrote out Dad’s speech and chose to use the words dead and alive, lost and found—because, by design, He wanted to characterize what had just happened with those words.

We could go on, but the point is that parables are fabricated stories, and their parts have been chosen by design. Parables give builders the opportunity to include or exclude what they want in order to make their point. Details are mentioned, not because the parable is a historical account or to remain accurate to real life, but because the author aimed to make specific points. It is those details, which have been chosen and woven into the story by design, that drive the message.

Sometimes a parable has a single main point that encompasses several characters. Sometimes it has several main points that involve multiple characters (e.g., suppose there were two prodigal sons, and one were still at home, because there are different ways to be “lost”). Sometimes the “speech” written by the storyteller is the primary point, and other times the characters’ responses make the point. The builder of the story has chosen the details—the characters’ words, their responses, and the situations in which they are found.

Parables are no different from hypothetical stories in form, style, and content. We say, “Let me give you a hypothetical situation. Two guys are taking a trip to California in an old jalopy of a car. Neither one has a lot of money, and they think they will be able to find enough jobs on the way to pay for their gas and food.”

We are leading to a point and have included details and circumstances we desire that will lead to the point we want make. We are constructing the story in such a way that does not give the listener an opportunity to challenge or reject the point we will make.

Sometimes we have to rewrite the story as we are presenting it. We revise it mid-presentation because we realize that we left an opening for disagreeing or contending with the main point. So we say, “Now, let’s add the fact that their car has serious mechanical issues.” Such a revision, by immediate mental construction, will help make our point.

Or sometimes we have to revise the story after we have finished and are challenged by the hearer. The hearer had been mentally running ahead of us, and at the end of our story says, “Gas is pretty cheap these days. They may well make it to where they are going with a lot less money and work.” So we say, “Let’s say then that the car is a gas guzzler.”

The purpose of such hypothetical stories is to make a point the way we want to make the point. With fictional stories, we have the right to construct them in such a way as to make our point with clarity, persuasive force, the ability to establish a parallel with what we seek to address, or all of the above. That is what makes a self-constructed story powerful: the ability to include the parts we want and that do not take away from the point being made.

We could make our point with a present-day real life story or a well-known historical account; however, such accounts may not include the parts necessary to make our point. Sometimes real life stories include details that allow the hearer to challenge the application we are seeking to make. But if I am good at construction and have thought my story through, then a fictional, self-designed story can lead the listener to a powerful point and application. Sometimes keeping the main point the main point means limiting the story to a few basic facts or including some necessary facts. Nathan the prophet did that with David concerning Bathsheba. Nathan chose just enough basic facts to lead to only one conclusion.

Parables are fictitious constructs, “Legoed” by the designer. They were built in such a way as to lead to a specific and effective conclusion. Even though listeners may have wanted to avoid a parable’s implications and application, the point was mentally indisputable by the nature of the characters and details the Lord purposely included. Listeners may have been unwilling to give the story validity in their own lives, but the point was clearly established. Though they may well have refused to see themselves in a parable, they could not fail to intellectually understand the details and the point being made. It indeed would be “hidden” from the eyes of those who were willingly ignorant and refused to see the clear truth that the Lord so well crafted through parables. The design of parables is what gives them their potential force and energy.

COVID-19 is affecting the well-being of orphans in the 22 orphanages operated by the Eastern Uganda Baptist ...more

Crossroads Baptist Church in Ghana has begun its second phase of construction after receiving a grant from Regular Baptist ...more

Amid health uncertainty and civil unrest, Victory International School in Myanmar is preparing for the new school year to ...more