World News March 13: A New York imam has declared that he will start a campaign on April 22 to make the April 26 birthday of the Muslim prophet Muhammad a national holiday. Read more about this and other world news. 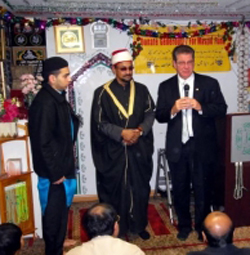 A New York imam has declared that he will start a campaign on April 22 to make the April 26 birthday of the Muslim prophet Muhammad a national holiday celebrated by Muslims and people of other faiths, reports foxnews.com. Mohammad Abdul Qayyoom, head of the Muhammadi Community Center in Jackson Heights in the NYC borough of Queens, published a copy of the petition via the center’s Facebook page to be signed by other religious leaders. The interfaith initiative asks for an establishment of April 26 as a federal holiday, “so that we can enjoy this day like the joy of Christmas.” “One good thing [about] this country are celebrations,” Qayyoom told The Christian Post Wednesday. “We have many celebrations—we have Christmas, we have the Valentine’s Day, we have Halloween, we have many many traditions.” Muslims would like to have one day as a holiday in the United States, Qayyoom told CP. And that would be April 26. The date was proposed because it is the day historically recognized as the day the prophet Muhammad was born in 570 A.D., the imam said. The Muslim calendar, following the lunar calendar, makes celebrating most holidays (like Ramadan) tricky in relation to the regular calendar, as they are movable, therefore celebrating that historical date seems reasonable, he claimed in the statement.