Does God Care What We Wear? 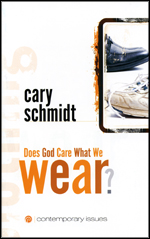 Author Cary Schmidt begins by pointing out that the subject of clothing is very confusing among believers in the 21st century. “As culture continually slips into sloppier and sleazier, many churches and families have all but given up this battle. Many are opting for the ‘God loves us no matter how we dress’ approach to Christianity. And of course He does! No one argues that point. But God loves me regardless of how I live too! . . . God’s love or acceptance isn’t the issue—pleasing Him and representing Him well are the issues.”

This booklet goes on to offer 11 principles to consider in the matter of how believers should dress. It ends with the author’s observations of dress requirements for guards at the Tomb of the Unknown Soldier at Arlington National Cemetery. He asks, “Isn’t it amazing how particular the Army is in the appearance and distinction of a tomb guard? What a stark contrast to the spirit of modern day Christians in the army of the Lord.”

This booklet is part of a Contemporary Issues series. Some of the other titles in the series are Biblical Guidelines for Using the Internet, The Biblical Sanctity of Life, The Blessings and Pitfalls of Social Networking, and Same Sex Marriage?