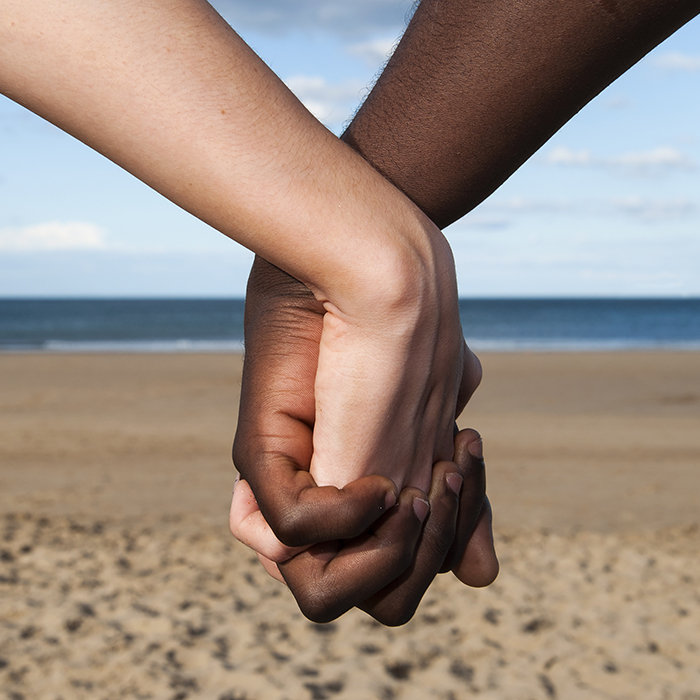 In 280 days, I get to marry my best friend—the man I admire more than anyone else in the world.

And some people are surprised he’s black.

When Ray Holden and I started dating during my sophomore year, I don’t think I fully understood racism. To me, it was an abstract—a deep feeling that people masked (sometimes successfully, sometimes not). But it was “out there,” not something I experienced myself.

Now I have, at least to an extent.

When people see Ray and me together, the reactions are mixed. Sometimes we get warm smiles of approval. Other times we’re snubbed and given sideways glances.

The first time I felt the disapproval of others stung. Suddenly, racism had a face. Sometimes the face was white; sometimes it was black. A coworker would ask me why I was dating a black guy. In public, Ray would hear a couple of random black men call him “white boy” as he and my family walked by.

But more times than not, people aren’t unkind. They’re just curious. Once, a girl was washing her hands beside me—a stranger who is now a very dear friend—and she just blurted out, “Hey, you’re dating a black guy, right?” I laughed as I dried my hands. “Umm, yes, I am. And who are you?”

Her question led to a wonderful conversation (not to mention a sweet friendship), and I was able to tell her our story. I love Ray for his person. I love that he surprised me on Labor Day by showing up to my 8 a.m. class with my favorite Starbucks drink. I love him for his character, for the way he treats other people, for his strength and his gentleness.

So, when it comes to our relationship and our commitment to each other, ethnicity just isn’t a factor. Our faith is. His character is. In the most vital ways, because of our love for Christ and for each other, we’re the same, not different.

I remember when I first learned this lesson. I was a teenager in Ohio, and my youth pastor, Joe Tyrpak, took our youth group on a mission exposure trip in Cleveland. We visited a mosque and a synagogue. We attended a Roman Catholic service and a liberal Protestant service (during which the female pastor celebrated homosexuality and denied the Trinity). The people in the Catholic church and the liberal church looked just like me—but we could not have been more different!

Our last visit was to a black Baptist church. Those people seemed so different from me in their appearance and expressiveness in worship. But they were joyful. They were welcoming. They were actually the only fellow believers we met during our tours. So they weren’t different from us at all. They were the same. Because, as my dad says, “grace erases race.”

One of the most frequent questions I get asked is, “What do your parents think?” Usually I just tell them that race isn’t a relevant factor in our family. My dad is actually the one who set us up, and my mom is thrilled that I’m going to marry a wonderful man who loves me, serves me, and cares for me better than I deserve.

I’m not crazy about the term “interracial dating” or “interracial marriage.” We’re both human (Acts 17:26). More importantly, we’re both Christians (Galatians 3:27–28). And our ethnic differences are beautiful. Opposition can be challenging, but we work through it, and it brings us even closer together.

I couldn’t be more excited to marry my best friend. And we’re praying that our union will be a small example of the creativity of God and the barrier-breaking power of the gospel.

Rebekah Anderson is a journalism and mass communication student at Bob Jones University. During her time at BJU, she has served as student body president and student ambassador and as a writer and copyeditor of the university’s student paper, The Collegian. This article was first published in The Collegian (Sept. 14, 2018) and is reposted here by permission.