Coming to Grips with Genesis: Biblical Authority and the Age of the Earth

Is Earth young or old? This question can’t be avoided in the subject of origins, and Coming to Grips with Genesis is most welcome to the discussion. 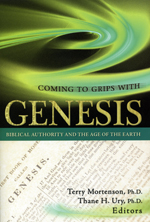 Is Earth young or old? This question can’t be avoided in the subject of origins, and Coming to Grips with Genesis is most welcome to the discussion. Sixteen Bible scholars contributed to the book; and Henry Morris, considered the father of Biblical creationism of the last several decades, wrote the book’s foreword before He went to be with the Lord. In addition, Paul Scharf has written a beautiful biographical tribute to John Whitcomb, who, with Henry Morris, cowrote The Genesis Flood. The tribute tells about Whitcomb’s conversion to Christ, his many years at Grace Theological Seminary, his sad dismissal from the same school of which he “had become almost synonymous” after 38 years, and his subsequent ministry, which has brought him countless opportunities to speak at schools and churches and on mission fields. He continues to influence others, even now as an octogenarian.

Among the chapters in this valuable book are the following: “The Church Fathers on Genesis, the Flood, and the Age of the Earth”; “Contemporary Hermeneutical Approaches to Genesis 1–11”; “Noah’s Flood and Its Geological Implications”; “Do the Genesis 5 and 11 Genealogies Contain Gaps?”; “Jesus’ View of the Age of the Earth”; “Apostolic Witness to the Genesis Creation and the Flood”; and “A Critique of the Framework Interpretation of the Creation Week”. These chapters cite many reasons for rejecting the idea that Earth experienced millions of years of death and natural evil before Adam’s sin.

Material at the end of the book includes recommended reading and resources, information about each of the 16 contributors; subject and name indexes; an epilogue; and a document, “Affirmations and Denials Essential to a Consistent Christian (Biblical) Worldview.”

Next post Music in Worship: A Microcosm of Ministry Decisions in Your Jerusalem

Previous post On the Fruit of the Vine: In Defense of Biblical Consistency