The Jesus Who Never Lived 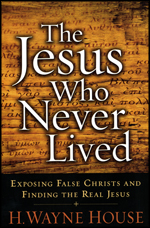 Jesus on at least one occasion asked His disciples Who people said He was. Today many people challenge with their own answers what the Scriptures declare concerning Christ. The purpose of this book is “exposing false christs and finding the real Jesus,” as stated in the subtitle. House begins by citing recent writings and films that give various unscriptural views concerning Jesus. He rightly points out, “Every year around Christmas and Easter the news media show an interest in Jesus. Rarely do they speak to people who believe in the Jesus who has been worshipped by the church since its earliest period until now. Rather, the fascination is with a Jesus re-imaged by people who have little interest in the historical record preserved in the New Testament.”

But this activity is both recent and primeval: “Jesus has become the favorite of ancient heretics, founders of various world religions, modern novelists, Hollywood and documentary filmmakers, New Age teachers, adherents of popular religion and over-the-edge liberal scholars. He is by far the most popular, and possibly most distorted, figure of history.”

Among the considerations House brings forth in his chapters are how Jesus’ family and disciples viewed Him, what Roman and Jewish sources and the early church said about Jesus, the prophecy of false messiahs, the rise of alternate christs, the Jesus of world religions, and the Jesus of pop religions. House concludes with a section on Who the real Jesus really is and that He is truly the focus of Christianity.

The appendix has a helpful chart, “A Summary of Early Heterodox Perspectives of Jesus” (Ebionism, Gnosticism, etc.). Notes, bibliography, and several indexes round out this valuable tool.