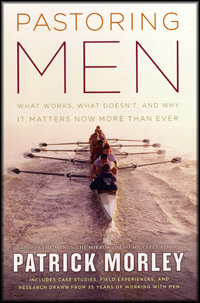 Recently a clergyman told this reviewer that one of the two greatest problems he sees in local church ministry is lack of male involvement. This clergyman is in the large denomination that recently voted to allow practicing homosexuals as pastors and a denomination that for some decades has also allowed female pastors. Small wonder? But the “men problem” exists in most fundamental churches as well, so we can’t be smug. Patrick Morley focuses on why men are the way they are and how pastors and churches can deal with their indifference. Morley has already made his mark in writing; his The Man in the Mirror is considered one of the 100 most influential books of the 20th century.

Three sections divide Pastoring Men: understanding men, reaching men, and teaching men. Before getting into these vital aspects, Morley devotes a chapter to whether pastoring men is worth the effort. No doubt, some pastors and churches are quite content to keep the status quo of a church made up of ladies.

The section on understanding men is important; the average man is under a great deal of societal pressure and, among other things, men are tired. It’s also important to understand what men want in life. The second section follows by focusing on what men need and how to disciple men, offering workable strategies. The third section consists of “70 things every man needs to know,” given in alphabetical order. For example, #25 deals with friendships. It’s amazing how many men have few or no real friends, and if they have any, it’s often coworkers.

This book should urge the reader to get going on rescuing men from the clutches of Satan, the world, and the flesh.

Previous post The Books of First and Second Thessalonians

The city council of West Lafayette has proposed an ordinance that some say is an attack on Biblical counseling, parents' rights, and religious ...more

Church ministry leadership is usually generational. Churches that have been growing and visionary often have had a group of pastoral and lay leaders of a ...more