A Regular Baptist Response to the Same-Sex Marriage Decision

With the Supreme Court's legalization of same-sex marriage nationwide, supporters of traditional marriage can’t help feeling as though they’ve been punched in the solar plexus. 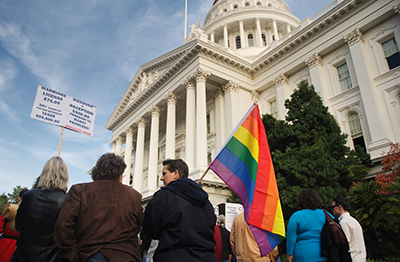 On June 26, in a 5-4 decision, the Supreme Court legalized same-sex marriage nationwide. This was not in any way unexpected or unpredictable—a majority of Americans now publicly support same-sex marriage, and SCOTUS has a long track record of legislating from the bench—but still, supporters of traditional marriage can’t help feeling as though they’ve been punched in the solar plexus. Social media is, of course, aflutter: many conservatives are posting eulogies to the late constitutional republic of America, while progressives are taking their victory laps (and, in more than a few cases, deriding the decision’s detractors). Today has been a momentous day. It will be quite some time before we even begin to feel the full effects of this Supreme Court decision, but feel them we will.

The position of the GARBC on this matter is unambiguous: holding Scripture to be the all-sufficient and ultimate authority for all matters of faith and practice, and holding on the grounds of careful exegesis that Scripture forbids all forms of homosexual activity, we take our stand unashamedly with supporters of traditional marriage. That being said, the Biblical, logical, theological, and legal arguments for traditional marriage have been well developed in other venues, so I won’t rehash them here. Instead, I offer just a few thoughts by way of response to today’s decision.

First, a good case can be made that this decision is yet another example of judicial overreach. In a dissenting opinion, Chief Justice Roberts wrote, “This Court is not a legislature. Whether same-sex marriage is a good idea should be of no concern to us. Under the Constitution, judges have power to say what the law is, not what it should be. The people who ratified the Constitution authorized courts to exercise ‘neither force nor will but merely judgment.’” His objection seems sound. It is difficult not to see this decision as a breach of the separation of powers. Nevertheless, griping about the court’s abuses, while perhaps cathartic, ultimately does no good. There literally is no higher court in the land to which this decision can be appealed, so we would be much better off contemplating the question, What should our attitude about this new state of affairs be? rather than Was the court’s decision legally justifiable?

In that vein, second, we have good cause for concern, but not necessarily for panic. God is still sovereign. Many a sinful nation has arisen and fallen in the history of human civilization. In the end they all turn to dust and ashes, but our God abides forever and He remains firmly in control of history’s confusing current. Let us not lose sight of that.

Relatedly, let us not forget that our nation has been on this pathway for some time. Today is less of a turning point than it is an arrival at the destination to which we were driving all along. I have heard some people lamenting that today is the end of the Judeo-Christian tradition’s place of privilege in America. These kinds of assessments are decades overdue! Our culture has tolerated heinous sins all throughout its history (racism, adultery, no-fault divorce, pornography, greed, materialism, and the murder of more than 50 million unborn children through the monstrosity of abortion all come to mind). This should remind us not to fall into the trap of unchecked nationalism. A certain level of patriotic fervor is no doubt virtuous, but only so long as the Christian keeps in mind that “our citizenship is in heaven” (Phil. 3:20). Premillennialists should be especially hesitant about expecting God’s kingdom to arrive on earth before Christ does. The apostle wrote, “All that is in the world—the lust of the flesh, the lust of the eyes, and the pride of life—is not of the Father but is of the world” (1 John 2:16). Why would we expect our nation alone in all of human history’s many civilizations to somehow be exempted from this assessment? Lest this sound overly discouraging, it is worthwhile to bear in mind the following verse too: “And the world is passing away, and the lust of it; but he who does the will of God abides forever” (1 John 2:17).

Third, now is the time to decide precisely what we are willing to sacrifice in favor of Biblical faithfulness. True, Justice Kennedy’s majority opinion does stipulate on page 27 that “religions, and those who adhere to religious doctrines, may continue to advocate with utmost, sincere conviction that, by divine precepts, same-sex marriage should not be condoned.” But many of us question whether this “right to advocate” for traditional marriage will really prove to be much of a shield once the inevitable anti-discrimination lawsuits begin. So Regular Baptists and our spiritual kin will need to decide right now what we will do once things start getting ugly. To what lengths will we allow ourselves to go in order to protect our tax-exempt status? Or to avoid a costly lawsuit? Or to escape wrongful imprisonment? In the earliest days of the Christian church, the apostles were bold enough to practice civil disobedience when duty to country and duty to God conflicted. “We ought to obey God rather than men,” they said (Acts 5:29). Will we have the courage to do the same? 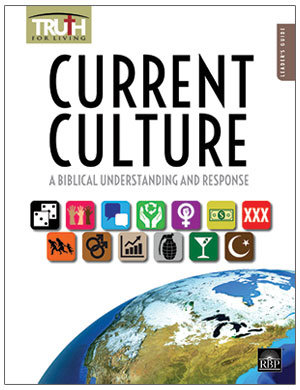 Current Culture: Biblical Understanding and Response, available from Regular Baptist Press, addresses cultural issues confronting believers today. It is designed to help learners think through the issues from a Biblical perspective so they can respond in a Biblical manner and influence their culture for Christ. Lesson 7 is titled, God’s Truth on Alternative Lifestyles.

Fourth, we must constantly bear in mind that Jesus loves homosexuals. He loves them so much that He voluntarily suffered the ultimate indignity and shed His priceless blood for them. He is no respecter of persons; He Who “desires all men to be saved” (1 Tim. 2:4) longs for heterosexuals and homosexuals alike to believe in Him, repent of their sins, embrace the gospel, and be transformed into His image. If we truly love Jesus as much as we claim, then we will have to love homosexuals too. That doesn’t mean that we should endorse their (in our view sinful) lifestyle choices or tiptoe around the Bible’s teaching on matters of sexuality. It does mean that we must never adopt an attitude of hostility toward them. Rather, we must make it a matter of supreme importance to show the world (not merely to tell them) that ours is a message of love, not hate. Ours is a principled objection to same-sex marriage, not to homosexuals themselves.

My plea to fellow conservative Christians is this: please do not fall prey to the highly charged political atmosphere such that you forget the heartbeat and priorities of our Lord, Who (to paraphrase Paul) “came into the world to save sinners, of whom we are foremost” (1 Tim. 1:15). Morality is important. Legality is important. Standing up for what we believe to be right (and denouncing what we believe to be wrong) is important. But even more important is our duty—indeed, our sacred obligation—to embody the mercy, compassion, and tenderheartedness of God, and to put those traits on display before a lost and dying world. Precious few (if any) will ever be nagged to the cross, but many can be loved to the cross.

The path ahead is uncertain, but our mandate remains unaltered: Pray hard. Love sinners. Stay on mission.

Previous post Bridgewater Baptist Accepts Challenge to 'Be the Church'