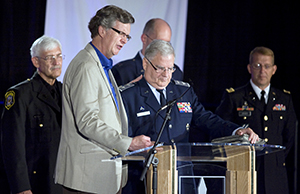 The Baptist Bulletin is now available in a digital format. It includes all the same great material as the print version, plus extra articles and photographs in a section called Bb Plus. The Baptist Bulletin, Digital Edition is included with your print subscription (digital-only subscriptions also available). Everyone can check out the September/October issue for free!

The irony was all too obvious. At the exact moment the June Supreme Court decision was announced, striking down key portions of the Defense of Marriage Act, Chaplain John Murdoch was standing on the platform of the GARBC Conference, introducing chaplains who stand at the forefront of a growing religious freedom controversy.

“It’s a sad day in our country,” said GARBC National Representative John Greening, who led in a prayer of dedication for the chaplains.

“I am saddened by this. I am not surprised by this,” Chaplain Murdoch said of the court decision. Speaking to the messengers who had just passed a key revision to the GARBC Articles of Faith, Chaplain Murdoch said, “You helped us tremendously yesterday with the constitutional change that is in place on marriage, because every chaplain is required by the government to stand true to the beliefs of their endorsing body.”

The chaplains had previously requested that the GARBC add additional language to the Articles of Faith, clarifying the association’s long-standing position against same-sex marriage. The revised doctrinal language helps the chaplains demonstrate that they are following the beliefs of their association of churches.

For now, Murdoch says the court decision will not affect the chaplaincy. For now, they continue to minister with freedom. But Murdoch used the opportunity to challenge conference guests toward greater awareness and advocacy.

“Above all, we must pray,” Murdoch says.

Later in the day the Chaplains Alliance for Religious Liberty responded with a formal statement to express disappointment with the court decision. “The Chaplain Alliance calls on Congress to pass enhanced religious liberty protections for all military personnel,” the statement said.

According to Chaplain Kelsey, he often fields religious freedom questions from the churches he visits, sometimes motivated by wrong information. “Some of the ‘watch groups’ can blow things out of proportion in the media,” Kelsey said, describing his freedom to minister to the soldiers.

“I don’t have a gag in my mouth. I can still preach the gospel freely from the pulpit.”

A Summer of Rumors

Chaplain Kelsey was referring to a confusing summer of news reports about potential threats to religious liberty. Though widely disseminated through social media and various websites, the reports turned out to be rumors, not real problems.

Blocking Baptist websites? In April Fox News had reported that the Department of Defense was blocking access to the Southern Baptist website, when users had noticed the site could not be accessed on several military bases. Several social media sites repeated the news report while accusing the military of anti-Christian bias. But as it turned out, the problem was with the Southern Baptist website itself, which had been attacked by malicious software. When the military’s filtering system rightly detected the threat, the website was blocked, but only until the SBC could repair their site.

Court martial for sharing your faith? In May the confusion continued when websites such as Breitbart.com reported the Pentagon was considering court martial for soldiers who share their faith. The Family Research Council even started a petition drive to persuade the Pentagon to reconsider its policy—until the news stories proved to be false.

“Service members can share their faith (evangelize), but must not force unwanted, intrusive attempts to convert others of any faith or no faith to one’s beliefs (proselytization),” said a Department of Defense spokesperson. That much was nothing new, according to Chaplain Robert Certain, executive director of the Military Chaplains Association. “This was the same guidance I received in the 1970s,” he said, the sort of policy that chaplains have always followed. But the rumormongering became significant enough that Chaplain Certain responded with a cautionary press release.

“We must remain vigilant for truth and at the same time be very careful about passing on innuendo and unsubstantiated rumors,” Chaplain Certain said. “In my opinion these situations do not indicate a conscious assault on freedom of religion.”

“We should always be vigilant,” Chaplain Murdoch says. “but for now, my advice is to continue to uphold our chaplains and country in prayer, and by all means, continue to ask me what is going on before responding to news media concerns.” Murdoch also expressed caution about organizations using the media reports to appeal for financial support.

Next post More Updates to the Articles of Faith

RBP Author Speaks on How Dispensationalism Makes a Difference

Dr. Mike Stallard was the main speaker for the Northeast Fellowship Fall Bible Conference hosted by Calvary Baptist Church. The conference theme was “Dispensationalism: The ...more

For Orchard Baptist Baptist Church, hosting a Fall Palooza is a great way for the church to connect with its community. ...more