MONTROSE, Pa.—When Pastor Bob Kadlecik came to Bridgewater Baptist Church in 2005, he had a dream. He says, “Before I die, I’d like to be part of a church that starts a new church or rescues a struggling church.” 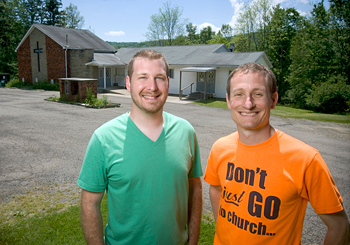 When Pastor Bob Kadlecik came to Bridgewater Baptist Church, Montrose, Pa., in 2005, he had a dream. He says, “Before I die, I’d like to be part of a church that starts a new church or rescues a struggling church.”

That dream became a reality sooner than he thought. “I thought it might take 20 years to get there, but that was pretty much it on my pastoral bucket list,” he says. “I didn’t think I’d be doing church planting before I was in my 50s.”

Today, Bridgewater Baptist—a church of 500 in a town of 1,600—is running three Sunday morning services, has started a satellite campus in nearby Hallstead, and is adopting a struggling church just over the state line in South Vestal, N.Y. The Montrose church is also building a new 16,000-square-foot, $2.2 million facility outside of town, while it still meets in the same structure that was built in 1899.

In 2011, Bridgewater Baptist was quickly outgrowing its facility, but deciding the best way to expand was unclear. For the past 100 years, Bob says, the church never grew above 100 people because of the auditorium’s size.

“That left us four options,” says Bob. “We could start a second service, then a third. We could send people away and start a church plant or a second site. We could spend millions on a bigger building. Or we could stop reaching people and let them go to Hell.”

Montrose elected to do the first three, in that order.

Bob explained that the church wasn’t initially excited about church planting when he first suggested it in 2007. Some church members asked why they would want to compete with themselves.

However, by 2011, Bridgewater did become excited about a multisite approach, so the church went in that direction. “It’s been cheaper and more effective for us to go to other communities, as Jesus commanded, rather than live happily ever after in Jerusalem,” says Bob.

But cheaper and more effective did not always mean safer and easier, he adds.

Take Jesus with You 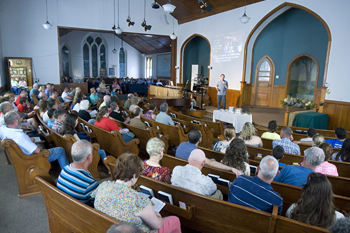 One of three Sunday morning services at Bridgewater Baptist in Montrose.

When the church started looking around for a new place to grow, they looked at nearby Hallstead, Pa. “We realized we had no people, no facility, and no money, but we had two really good leaders,” Bob said, “and one was a really great inviter.”

One of those leaders was Kyle Landis, now the Hallstead campus pastor, who wasn’t originally convinced he was the right man for the job. In fact, he had no interest at all. “I’ve never been a pastor,” he protested. “I sell sewage equipment.”

Eventually, Landis agreed to be the campus pastor, and soon after, someone anonymously agreed to give Hallstead $65,000 in start-up funds. “If we didn’t have Kyle Landis, we would not have gone to Hallstead,” says Bob. “Kyle and [his wife] Kristi, and another key couple, Steve and Carol Galloway, were mature believers who were burdened for their community.”

Next, the church needed a place to meet. After looking around, they were eventually welcomed by the American Legion Hall. Meeting for worship in a room next to a bar presents a few challenges, says Bob, like having to buy filters to purify the air because of the cigarette smoke. “But the space was really good, and the men of the Legion were super nice.”

Pastor Landis concludes each Hallstead service with the same admonition to the congregation. “Remember, when you leave this building, it turns back into a bingo hall, so take Jesus with you.”

Once they had the leaders, money, and the facility, it came time for Bridgewater to recruit members to leave and become a core group of “pioneers” for the Hallstead church plant. More than 50 Montrose members agreed to sign commitments to attend Hallstead for one year, give their offerings to the church, pray, and invite at least 10 lost or unchurched people to come.

During the first month, Bob says Hallstead services averaged 94 people, with visitors consisting mainly of unchurched friends invited by the pioneer group. Today the church is running about 170 people and has two morning services. The town’s population is almost 1,300.

When Bridgewater Baptist wanted to expand again, a struggling congregation came to them for assistance. South Vestal Baptist Church had dwindled to about 20 people when the last deacon, John Mooney, came to Pastor Bob and said, “We’re ready for Montrose to come in and take over!”

The first time Pastor Bob was invited to preach at South Vestal, he deliberately told the congregation all the “bad news” he could think of to make sure they really understood what they would be giving up to partner with Bridgewater Baptist.

“I told them if they wanted to reach lost people of their community, they were going to have to put up with annoying music, get rid of their pews, and sell their parsonage. Basically, I told them you will be part of this new church, and we will decide together on a new pastor, but you are going to lose control.”

After a few questions about the voting process, the congregation agreed to the terms, and today Pastor Ethan Morrison, a former Bridgewater pastoral intern, is their newly installed campus pastor.

When Pastor Bob asked Bridgewater for volunteers to help the move to the new campus, 51 members committed to becoming South Vestal pioneers.

Because of its age and lack of upkeep, the South Vestal church building is in need of renovations. Its current auditorium seats 80, but Pastor Morrison wants to remodel it to hold 150 so they can eventually graduate to two services. The parking lot is also in poor condition.

Bridgewater got a big boost toward making those renovations when Pastor Bob was given a check for $100,000 by another anonymous donor to help with start-up costs. “This man has never been to Bridgewater Baptist Church before,” Pastor Bob told his congregation. “But he loves the [South Vestal] community.” 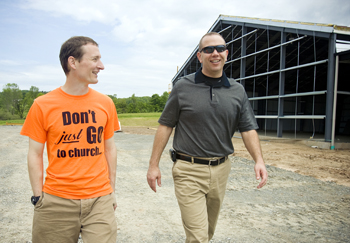 During a recent visit, Pastor Morrison asked Baptist Builders Club Director Michael Nolan if there was any possibility that South Vestal would also be eligible for financial assistance like what Bridgewater received for its building project. Michael said they were and that the church should discuss the ministry and consider sending an application. Bridgewater received an interest-free loan from Baptist Builders Club to help with the new Montrose facility.

After the auditorium renovation, says Pastor Morrison, he wants to remodel the children’s wing by the fall 2013 launch service because so many young people attend. Pastor Bob says that one-third of the congregations at the South Vestal and Hallstead campuses are under 18 years old. “When one of the secretaries came and told me that, I didn’t believe it.” Bob said. “I told her that’s wrong. Go back and check it again.”

The secretary was right, and to make their youth programs lively, the Bridgewater pastors are intentional about children’s activities during church services. The 70-minute services for kindergartners through fifth-graders are broken into segments for skits, songs, lessons, learning activities, and application, where they are together and in small groups according to age.

When Pastor Bob was updating his congregation on a recent Sunday morning about the progress at the two campuses in Hallstead and South Vestal, he summarized the need for interdependence and cooperation among the body to accomplish the Lord’s work. He said, “If you want to go fast, go alone. If you want to go far, go together.”

Darrell Goemaat is director of photography for the Baptist Bulletin and Regular Baptist Press.